This post is the first in a series where I will share some thoughts following my visit to Uruguay, which took place from 18th-27th August 2018. I was visiting professor at the Universitidad de la Republica, which is the largest and only public university in Montevideo. The visit was centred around delivering a masters level course for teachers, librarians and lecturers on Copyright Literacy and Open Practice, which I taught to an enthusiastic cohort during the evenings of the week of my visit. I was based in the Faculty of Information and Communication and most of the students were working in the day time, so evening classes are quite common in Uruguay. The students had a chance to play the two educational resources that Chris and I have developed, Copyright the Card Game and the Publishing Trap as part of the course. They also planned some engaging approaches to copyright education and considered how concepts such as open practice impact on their work. In this first blog post I will reflect on some of my experiences of teaching the course, and the lessons I’ve learnt which are going to be useful when planning a new module I am teaching at City University starting in October 2018.

Many things struck me as being different in Uruguay, although also strangely familiar in many way! What was clear is that access to resources, specifically to published content is far more limited in Uruguay, and for that reason it has been one of the key factors driving an interest in open education, open textbooks and more sustainable models of providing students with access to knowledge. Universities are free in Uruguay, students pay no fees and there are no entry requirements. My host Virginia Rodes told me on several occasions they have been practicing open education in Uruguay for nearly 200 years (The University of the Republic was first founded in 1849). Reflecting on what ‘open’ means was an important part of the course and it’s also clear that in Uruguay in particular, open means accessible, for students from all types of backgrounds and particularly for students with disabilities and visual impairments. So there are no entry requirements to attend university in Uruguay, to encourage students from all backgrounds to go on to study further. However as a point of principle, the fact that education up to and including higher education is free for students, is a real contrast to the UK. Those on my programme were surprised to learn that students in the UK paid fees, and could end up severely in debt at the end of their studies. I was constantly asked if the UK government didn’t want students to study at university, based on this policy. And I spent some time reflecting on the UK’s ‘widening participation’ policy and if it actually works. 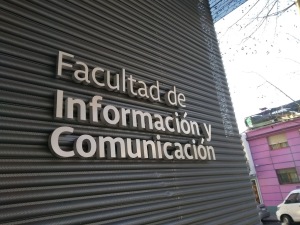 I was based in the Faculty of Information and Communication which is a large impressive building, centred around an old church, with a modern exterior, but preserving the historic building in the heart of it. It was a lively place with students studying a whole range of subjects including communication studies, media studies, information and librarianship. Virginia, my host, coordinates the ProEVA which is essentially a teaching, learning and technology centre you would have in a UK university. They have 7 staff but host Moodle and a range of educational technologies (pretty much all open source, including their lecture recording system). Several of the staff also are part of the university’s OER centre (Nucleo REA), which have run an impressive range of interdisciplinary projects over the last few years, also involving staff from the library and across the faculties. It was the project they ran on student access to textbooks that first got me interested in Virginia’s work, which highlighted the problems that a limited budget and really restrictive copyright laws, were having on students in Uruguay.
In the first workshop I was keen to get students active and so after introductory remarks and some discussion about the background of the students taking this course, I launched them into playing Copyright the Card Game. I explained it was based on the law in the UK and had provided some helpful background about how licences and exceptions worked in the UK. It was clear the situation is quite different in the UK, but the card game proved to be an excellent ice breaker for getting everyone warmed up to the key concepts in the course. The idea of coming up with a team name caused much hilarity and we ended up with three teams of ‘Queen Anne’ (which also turns out to be a whisky in Uruguay) ‘The Pirates’ and the ‘Copyright Ladies’. The Pirates won the day in the end (don’t they always!) and the prize of some Information Literacy post-it notes was awarded.
When reflecting on what open practice meant, I found some really interesting issues aside from open meaning free, were discussed. In particularly accessibility is a key issue in Uruguay, and another project Nucleo REA have run is about digitising public domain texts to make accessible readings for students. Uruguay are about to implement the Marrakech Treaty, to enable accessible access to copyright content. For some reason they assumed the UK would be streets ahead on this front and so I shared some of the experiences from the UK. I was able to talk about the OPERA project led by Chris’s colleague Ben Watson at the University of Kent, and initiatives such as Sensus Access and RNIB Bookshare. But no I admitted, the UK had not yet implemented Marrakech, although it will be ratified shortly [Ed – the exact details of how and when this will happen depend on the outcome of Brexit].

In the second half of the second day I got students to play the Publishing Trap, which they also really enjoyed. I worked with Patricia Diaz, who is a lawyer, a member of Uruguay’s Copyright Council and another of my host’s during my visit. Patricia and I found much to talk about during the week, such as the finer points of the differences between fair dealing and fair use, we also discovered a shared love of cats! And spent a lot of time communicating in what she called Spanglish, which was where we learnt that more words in Spanish are actually quite similar in English than you might expect. Patricia’s research has examined copyright exceptions in four Latin American countries, partly to highlight the lack of exceptions in the law in Uruguay. She also plans to help translate and adapt the Publishing Trap into Spanish, for use in Uruguay. We had a lot of fun during the game, with one team (playing Brian the microbiologist) deciding to go entirely ‘closed’ in their approach to the game. Unsurprisingly they lost the game! We concluded Brian really didn’t want anyone to know about his research unless they paid him! He was holding out for a big break with a pharmaceutical company which never came!

On the final day which was mainly focused on lesson planning, creative approaches to copyright education, and thinking about strategies for embedding this in your teaching, the groups came up with some really inventive lesson plans based on a number of scenarios I gave them. They were also really good at writing learning outcomes and at the end of the session I discovered critical pedagogies played quite a significant role in the approach to education in Uruguay. Interesting, as I had taken a copy of Friere’s Pedagogy of the Oppressed to read and was well aware he came from Brazil. At the end of the course I set an assignment for the students which they have three weeks to complete – they will be reflecting on their approach to open practice or copyright education and writing either a lesson plan or an action plan to embed aspects of what they learnt into their own teaching. I can’t wait to see what they come up with. It was a fantastic experience to develop a whole course such as this and has made me even more excited about launched my new module at City University on Digital Literacies and Open Practice which starts in mid October. You can take a look at the course blog I’ve set up to get an idea of what this course will cover.

But for now, I’m reflecting on how lucky I was to be invited (and funded) to visit Uruguay and I’d like to thank Virginia, Patricia, Manuel and Alicia and everyone I met and spent time with in Montevideo. Particular thanks also to Ian Duddy, the British Ambassador for inviting me to tea (Ian once worked for the IPO so we had to talk about copyright!) and also Graham Stanley from the British Council, who I met up with one evening, who told me about an amazing video conferencing scheme to teach English in all the primary schools in Uruguay. I’ll share some more stories over the next few weeks about my meeting with the Uruguayan Copyright Council, the conference keynote I gave and the workshop I ran for 100 librarians (many of whom did not speak English) and where we played Copyright the Card Game. Uruguay is a very special place and I was honoured to be able to meet so many wonderful people and learn from them.