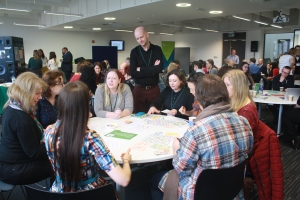 On Tuesday 3rd April at the University of Liverpool we held the first International Copyright-Literacy Event with Playful Opportunities for Practitioners and Scholars (Icepops). It had been over 6 months in the planning and we were delighted by the number of people that wanted to speak at the event and attend: it attracted over 65 delegates from 9 countries. Some of them stayed on for the LILAC conference (which Icepops was a satellite event of), and some just came because they are passionate about copyright education. There was a mixture of copyright officers, librarians, civil servants, lawyers, publishers and other representatives from rights holder groups. Although we wanted to encourage delegates from as many fields as possible, in fairness the majority were librarians or copyright specialists in higher education. However, we did have a number of delegates from further education, government libraries and elsewhere. All the presentations are now available online.
Rather than give a run down of the day, which Rhodri Hughes from CLA has already done so well, we thought it would be useful to pick out some common themes from the event. This blog post also points you to some photos from the day and all the presentations which we have now made available from a dedicated web page. So as the creators of Icepops, what themes stand out for us?

Right from our opening keynote, Ronan Deazley (who dispelled the idea that copyright was dull, boring and restrictive by making references to Fifty Shades of Grey), via the games hackathon led by Alex Moseley and Hayleigh Bosher, through to Kyle K Courtney’s Fair Use game show, there was an energy about the day, which was unlike other copyright events that we’ve been to. Not that copyright events aren’t fascinating, with passionate speakers (because they are), but they are not generally playful, fun or creative and the format is often quite traditional. Our speakers displayed real passion for their subject and their enthusiasm was infectious, but we also mixed things up trying some new style presentation formats such as the world cafe and the games hack and even had time to practice some mindfulness after lunch thanks to Hayleigh.
Fun but relevant:
We set the tone with the ‘Copyright Exceptions Buddy Bingo Selfie Tweet-Scramble’ opening ice breaker which we devised as a way of combining Chris’s nerdy knowledge of copyright exceptions with Jane’s favourite icebreaker (human bingo). We wanted to convey the idea that having fun doesn’t mean not taking copyright seriously, or ignoring the substance and detail of the law. Unknown to each delegate, we had put in the back of their badge either the Section number or title of a UK Copyright exception and they had to find their matching pair. The first to do this and to tweet a photo of themselves was the winner (well done Ronan and Tess)! We were also very pleased we could debut our new ‘periodic table of UK copyright exceptions’ t-shirts later on in the day. The Karaoke Shower which the IPO brought along was another example of the playful approach to copyright. Yes it’s a karaoke machine installed in a shower cubicle and who doesn’t like to sign their heart out in the shower? [Ed er… maybe some people would prefer Jane didn’t…]. Yes it’s a gimmick but it’s also an opportunity to engage people in something that’s fun, and designed to make a serious point about music and copyright. We were really grateful to Catherine from the IPO Education team for bringing it along on the day and we do apologise for those who said they could never listen to Islands in the Stream in quite the same way again!
Pace:
We tried to keep things short and sweet and the day had a quick pace to it, which probably explains why we were both so exhausted the next day! From lightning talks to the World Cafe, where speakers got 5 minutes to pitch their ideas, we wanted to pack in plenty of content and allow people to pick and choose where they turned their attention. What we hoped was that this pace meant not only delegates got to hear from lots of speakers, but it was difficult to get bored. And from looking at the initial feedback, most people left wanting more which is never a bad thing.
Fuel:
When you do a lot of thinking, you need food, drinks and cake [and for those lucky enough to stick around afterwards, some alcohol] to keep your energy levels up and this was a theme of Icepops. Morning coffee, afternoon tea with cake and the evening reception with a curry buffet and open bar. We were grateful to our sponsors for their generosity. Of course as ever we made Icepops themed cakes but we also had the most amazing lollipops, sponsored by the CLA.
Multiple perspectives:
One of the key things we wanted to do at Icepops was hear a range of perspectives from both rights holders and copyright creators. It was clear that copyright education was the main focus of everyone who attended, and while we may have some fundamental differences in how we view copyright, at the heart there was more that brought people together than divided them. Mixing people up, ensuring we had some publishers and rights holders presenting, and having representatives from two government intellectual property offices made a really interesting dynamic.
Creativity:
Perhaps the key element of Icepops was the celebration of creative approaches to copyright education. The lightning talks and the world cafe both highlighted a huge range of talent and imagination when it comes to getting the copyright message out there. Imaginative presentations, creative games pitches, interactive demos – we saw some real innovation during the day. We felt inspired and motivated by talking to people with so many ideas, many of which were inspired by others either attending or unable to.

And on reflection that’s the aspect of the day which most struck us. Creativity does not mean sitting in isolation, coming up with an entirely original idea unlike anything that has come before. Creativity involves immersing yourself in the creative expressions of others and finding your own contribution as part of that. Of course, how to navigate the sometimes confusing landscape of promoting/protecting your own work and respecting the efforts of others is what copyright literacy is all about. But Icepops gave delegates an opportunity to celebrate each others’ contributions as copyright educators whilst also providing inspiration for future work and collaborations. We very much look forward to continuing on from this excellently encouraging start…once we’ve had a chance to get our breath back of course!

All images, video or interactive content are all rights reserved unless otherwise stated. Please read our Legal Disclaimer.