Last week we attended and spoke at the 6th DARTS conference. It’s organised by the CILIP Academic, College and Research Libraries Group’s South West branch and set at Dartington Hall just outside Totnes. It’s a beautiful part of the world to bring together 50 delegates interested in research support. What’s interesting for us both is library research support is not the primary focus of either of our roles however we’ve found ourselves, in the quest to spread copyright enlightenment, creating a game that has generated a lot of interest from this community. It was our intention to try to create a game that focused on open access, scholarly communication and all the copyright and licensing decisions that are associated with it. However, the audience for our game is not ultimately the research support community, it’s the researchers themselves. I guess what has become clear though is that the game is valuable for librarians and they need to play test it thoroughly if they then decide to use it as a teaching resource.

We had great fun showcasing our game on the second morning. We also talked about the broader concept of copyright literacy and created a Kahoot quiz to test people’s knowledge of Secker and Morrison. To clarify, I’ve written a lot more than Chris but in a 400m race he would definitely beat me! [Ed – we think. Plans to test this out on the Friday morning were somewhat compromised by the late night at the conference dinner on Thursday].

Kahoot is always a win with librarians! #DARTS6 pic.twitter.com/bDjgq0TOcV

https://platform.twitter.com/widgets.js
After the DARTS conference we’ve been thinking about the purpose behind creating open educational resources and wondering as creators where our role starts and ends.

There is something wonderful about creating something that people like. Even more so if it’s useful and beautiful (I’ve always drawn heavily on the ethos behind the Arts and Crafts movement and the words of William Morris who said we should have nothing in our homes we believe to be beautiful or know to be useful). So creating Copyright the Card Game was a fantastic experience because first of all we made something useful and then when we had plenty of testing and feedback we refined it, improved it and used colour and design to make it beautiful.

The Publishing Trap is in my view both a thing of educational value and of beauty. But it has some issues we would like to fix. It’s got some bits that just need changing because either through our experience of playing it or feedback from others, we know they don’t quite work. Its also got a few places where the design of the board and cards could be improved to make them easier to understand. We definitely want to make some amendments and to invest in some redesign work and to launch version 2.0 at some point soon. But it’s started us thinking about how far you go making amendments to a game that ultimately you want to be an open educational resource. One of the greatest benefits of OERs is that you share them to inspire others. And you let people use your resources in a way that makes sense to them in the context that they work. I’ve wondered at the wisdom of trying to fix everything about the game in version 2.0 as I’m sure people will still find things they want to do differently. Chris has some other ideas about how we could compile and share all the possible amendments we’ve received warts and all, in the way open source software developers do [Ed – surely if there’s an opportunity to make a large and complex spreadsheet it should be seized with both hands]. 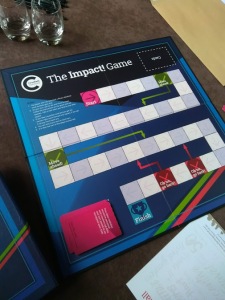 One other thing that I found at DARTS was that by playing two other open access / research support games (The Game of Open Access from Huddersfield and Cranfield’s Impact! Game) I found myself wanting to make different spin off versions of our game. I don’t think either of us wanted to be full time game designers. Not that we haven’t enjoyed it and learnt a lot, but in the wonky world of open access I fear it could become a lifetime of work trying to perfect this game. So in the spirit of openness I think we will fix some things but we are keen to see what others can do with the Publishing Trap after that, to adapt it in ways that make sense to them. In the words of the famous song, if you really love someone (or something!) you have to set it free! Watch this space to see what steps we take next.

Our slides from DARTS will be available online on the conference website as with most of the other presentations from the day. We’re grateful to the DARTS team for inviting us to such a magical place! And for those who think some sort of strange occult happenings were taking place at DARTS6, based on tweets that morning, I can assure you they were not.

High priest and priestess @cbowiemorrison and @jsecker prepare the sacred cards as the librarians look on in quite reverence. Once the subsequent chanting had finished, a student who had boasted about never using the library was brought in and sacrificed… #DARTS6

Now on with the show! The next stop on the Publishing Trap tour will be Oxford on 12th June, followed by Berlin on 14th June!