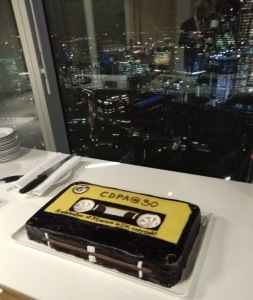 Our guest post this week comes from Neil Sprunt, Learning and Teaching Librarian and copyright specialist at the University of Manchester. Neil reports on the recent 30 year anniversary of the UK’s primary copyright legislation. This post was updated on 15th December to include a link to the photos from the evening taken by Meghan Mazella.

The Copyright, Designs and Patents Act was 30 years old this November and to celebrate this a group of copyright enthusiasts from the world of rights management, education and law met in London to raise a glass in the Act’s honour. By any measure the CDPA is a significant piece of legislation which has stood the test of time and several significant reviews of copyright and intellectual property. As practitioners we frequently consult the Act, and although it has its faults any legislation which lasts 30 years must be doing something right.

The event was organised by the CDPA@30 organising team in conjunction with UK Copyright Literacy and Reed Smith, with Reed Smith hosting the event on the 33rd floor of the Broadgate Tower in central London. The views over the city were amazing, despite storm Diana blowing a gale outside. The views inside weren’t bad either and I have to say that in all my 6 years of working in the ‘copyright business’ this was the swankiest and most well-dressed event I’ve ever attended. Everyone looked great and fortunately I had purchased a suit on Black Friday (never again) so didn’t feel too out of place.

After a welcome from our host Stephen Edwards from Reed Smith, Sarah Faulder CEO of Publisher Licensing Services presented a brief tribute to the Act, reflecting on the ways in which it has influenced creative activity in the UK and throughout the world.

Celebrating 30 years of the CDPA – what a milestone! Thanks to ReedSmith, Jane Secker and others for hosting! #cdpa30 pic.twitter.com/W152zzpVno

This was followed by Jane and Chris introducing the now legendary icebreaker activity “the Copyright Exception Bingo Buddy Selfie Tweetscramble”. Congratulations to Louise Doolan from City, University of London and Anna Vernon from Jisc Collections who clearly found the right combination of speed, geekiness and social media nous.

Then there was fantastic retro cake to remind many of us of the first time we infringed copyright law by recording the Top 40 chart off the radio, and then selling bootlegged copies down the market at the age of 15 (don’t worry the second part of that isn’t true….I was actually 16)…. Anyway, I’ve been finding ways around copyright ever since, but instead of using my Hitachi ghetto blaster and my Uncle Del’s market stall, I now use the marvellous exceptions available to me through the Act in an educational context. [Ed – we think he’s joking. But then again you can never tell with these librarian types]

The karaoke shower at its peak! We’re celebrating #CDPA30 high above London… pic.twitter.com/vQSH3oJtAc

Anyway back to the party, not only did we have cake and fantastic views, we also had the IPO Education team’s karaoke shower, which also featured at this year’s Icepops event. In fact I’m beginning to think that this machine might be somehow physically attached to Jane and Chris as it seems to travel around with them everywhere, and they’re never out of it! I’m not really a big public singer myself, mainly because I don’t want to embarrass people with my octave range. However, many guest did have a go, and much fun was had. 1988 was actually a really great year for pop music with some brilliant songs from some of the legends of pop such as, Michael Jackson, Fleetwood Mac, Whitney Houston and Matt Bianco.

This really was a once in a life-time event and it was great to see loads of familiar faces and friends, as well as meet new copyright people too. I felt incredibly privileged to share in the occasion, celebrate an anniversary of something that has become a significant part of my working life, with great people and in such a stunning location. Here’s to another 30 years of the CDPA, with maybe some more educationally beneficial amendments 🙂

Thanks to Neil for his summary of the event. Would you like to share your memories from CDPA’s thirty year history? If so, please get in touch.